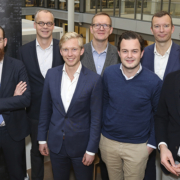 Cybersprint is growing rapidly and has gained a leading position in Digital Risk Protection in the Benelux market over the past two years.

With this investment, we can fuel our rapid growth and further expand our team and business into the European market. Companies and governmental organisations are increasingly aware of the digital risks and challenges they face. Our unique Digital Risk Protection platform helps organisations map all digital risks. By giving our clients control over their entire online footprint, they can better protect their business, brand and reputation. I am excited about the next steps we can take with the support of our current and new investors.

Evert Jan de Groot, partner at Vortex Capital Partners, adds: “The CEO-fraud we have recently seen at Pathé Cinemas is just the tip of the cybercrime iceberg. Cybersprint has deep domain expertise in detecting digital vulnerabilities and is managed by an experienced team. Their platform can, for instance, immediately detect fraudulent domains the moment they are registered, allowing organisations that could be at risk to intervene before the damage is done.” 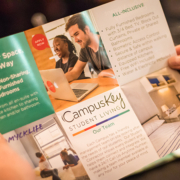 Since the start of CampusKey in 2012, they have successfully developed student housing facilities in six university cities and currently house 3749 students. Their main focus will be on international students and the concept therefore includes a couple of distinctive features that sets this formula apart from others.

There is a strong focus on safety and security within the building, using finger recognition technology to enter the premises and rooms. They also offer 24-hour counselling and mentoring services to students who are in immediate need for help or guidance, far away from family and friends. The main purpose of CampusKey is to create ‘a home away from home’, which means activities for residents are organized on a weekly base, so students can meet up, interact and make new friends.

Leiden is not only relevant as a student city, but it also has quick access to Schiphol Airport, with the rest of Europe in easy reach.- Chris Heunis, Managing Director of CampusKey Europe

CampusKey was assisted in setting up the Dutch operations in Leiden by the Netherlands Foreign Investment Agency, InnovationQuarter and the City of Leiden.

CampusKey Co-Founder Neno Haasbroek: “As the South African market is now well served by our concept, we decided last year that it would be interesting to look into expanding to the European market. Our preliminary research was very promising and we believe there is a lot of potential in Europe, especially when you look at the tremendous increase of foreign students coming to Europe.”

Deputy Mayor of Leiden, Paul Dirkse is happy and proud that yet another South African company has chosen Leiden for the location of their European headquarters: “Being the oldest university city in The Netherlands and one of the oldest in Europe, I can fully understand their decision to locate to Leiden! I’m sure the expertise CampusKey has built up over the years in South Africa in creating ‘a home away from home’ will be of added value for students and student cities throughout Europe.”

Besides historical ties and a similar language, The Netherlands was especially chosen for its comparable business mentality, which is, like in South Africa, also based on cooperation, openness and straightforwardness, says Chris Heunis, Managing Director of CampusKey Europe: “Leiden is not only relevant as a student city, but it also has quick access to Schiphol Airport, with the rest of Europe in easy reach”. 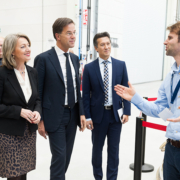 ArianeGroup, which has the design authority and industrial lead for the Ariane 6 launcher development and operation on behalf of the European Space Agency (ESA), appointed Airbus Netherlands partner for the development and production of the Ariane 6 Vulcain Aft Bay (VUAB) and the Vinci Thrust Frame (VITF) in June 2017. It led to the decision to build a dedicated industry 4.0 facility for the development and production of the Ariane 6 and also Vega-C structures. “Within 10 months, our state-of-the-art assembly facility has been built and equipped with innovative solutions, like a robotised production line and visualisation tools,” says Arnaud de Jong, managing director of Airbus Netherlands, “The smart factory is now fully ready to fulfil its challenging task and today’s opening is the crowning glory of a huge team effort. An effort which illustrates the clear mind-set to produce the new Ariane 6 engine frames in the most cost- and time-efficient way.”

InnovationQuarter has been involved in the process of finding a suitable location for the new Airbus production facility. “We are most happy with the expansion of Airbus,” says Niels Krol, senior accountmanager (Aero)space at InnovationQuarter. “It means a significant reinforcement for the space cluster in our region.”

To address the challenging commercial set-up of the European Ariane 6 programme, the Dutch space company Airbus chose a development and industrialisation approach that strikes a balance between heritage and the needed innovative green fields approach. This led to two key decisions to optimise the logistics and the assembly line:

The facility is equipped with ‘Industry 4.0’ robotisation and automation capabilities, in order to be prepared for the anticipated production rates up to 24 engine frames (12 VUAB’s and 12 VITF’s) per year. Key elements of the industrialisation approach are: