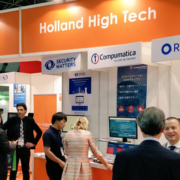 During this mission InnovationQuarter, NFIA, Dutch embassy/Innovation Office and HSD Office represented and positioned the Netherlands as the secure digital gateway to Europe. In addition HSD partners SecurityMatters, Compumatica, Redsocks Security, TU Delft and ReaQta presented their cyber propositions to Japan, with the aim to have exposure and create new relationships with Japanese businesses, knowledge institutions and the Japanese government. The purpose of this mission was to contribute to a Cyber Secure Japan and its critical infrastructures in relation to the Olympic Games 2020.

Jan-Hein Chrisstoffels (Netherlands Embassy, Tokyo): “We have been running this Japan-project for 4 years straight, promoting Dutch cyberexcellence as a niche proposition in the Japanese market. We launched it during the State Visit to Japan, October 2014, signed PIB in Summer 2016, and are seeing real results rolling in today. That is very satisfying.”

Redsocks Security together with its Japanese partner Networld, had their first dealflow. Compumatica prepared a testcase together with a new partner/customer. TU Delft strengthened their relation and cooperation with the University of Okohama International University and Kyushu University. ReaQta had many relevant conversations in relation to finding the right Japanes partner. And all of them gained new contacts and leads.

Also, a business deal of multiple Dutch parties with an end-user and strategic partner in Japan is in progress.

In addition, Security Matters together with their Japanese partner Macnica Networks showcased their case study about the deployment of ‘SilentDefense’ in TEPCO Power Grid (TEPCO PG), the largest electric power company in Japan. This case study was officially announced on 18 May 2018 by a press release. With the number of cyber attacks constantly on the rise and the upcoming Tokyo 2020 Olympic Games, TEPCO PG selected Security Matters’ SilentDefense to enhance the cyber resilience of its industrial infrastructure and the security of Japanese social infrastructure.

Damiano Bolzoni, co-founder SecurityMatters: The Japanese market is one of the most demanding in terms of technical quality and flexibility requirements, and it’s very difficult to reach the high level of trust required to work with their critical national infrastructure. The establishment of this fruitful relationship would have not been possible without the Dutch Embassy, the PIB programme and the partners facilitating our events in Japan and offering their invaluable assistance with building the trust to establish a relationship. Because the Japanese market is dominated by giants, the forming of a successful relationship with a European company is vital. This will both increase the opportunities for Dutch R&D and demonstrate a best practice for other high tech Dutch companies.

InnovationQuarter, the Dutch embassy, NFIA and HSD Office had many fruitfull meetings during the Japan IT Week. The concrete results will be announced later this year. 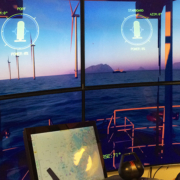 Get in touch with the market

Many maritime companies, especially SME’s, were having trouble getting in touch with ship owners. That’s why Netherlands Maritime Technology (NMT) decided to introduce a Technology Exchange Roadshow (TER). Through this joint visit, organized by NMT and InnovationQuarter, contact between maritime companies and their market was more easily established. The Technology Exchange Roadshow is made possible by the Maritime Delta association. The participating Dutch companies – Alewijnse Marine, Hatenboer Water, VAF Instruments, Vuyk Engineering, Hug Engineering, Hull Vane, TKF and WEG – had the opportunity to present their business and solution. A visit was paid to Vard Design, Ulstein Shipyard, Remoy Management AS and Kleven Shipyard.

Keen to learn the Dutch way

These Norwegian maritime companies were all keen to learn about the solutions provided by the Dutch companies. Hatenboer Water for instance is able to provide complete, custom made fresh water systems using a variety of technologies. VAF Instruments has made it its mission to reduce environmental impact and provide measurement systems to create awareness about operational efficiency.

Keen to learn the Norwegian way

For both Dutch and Norwegian participants the TER proved a good and efficient way to learn more about each other and to give the Norwegian companies the opportunity to ask questions. The Norwegians were exited saying that a lot of the presented cost effective solutions were relevant to them. The Dutch companies in their turn were provided with useful business contacts and insight into the strength of the Norwegian market as well as the challenges they face.

Since a significant growth is seen in the market for offshore wind, fishing and cruise vessels, this was an excellent time to introduce the Dutch delegation in Norway. Both NMT and InnovationQuarter will continue to support the Dutch maritime sector in exploring opportunities in this market. 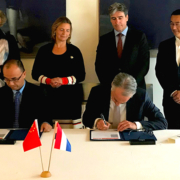 GenScript will be a valuable addition to the Leiden Bio Science Cluster. GenScript offers a one-stop service package as to maximize innovation, eliminate the need to search for multiple vendors, and reduce waste. NFIA and InnovationQuarter have had the pleasure of assisting them with information, introductions to service providers as well as introductions to the life science community in Leiden. 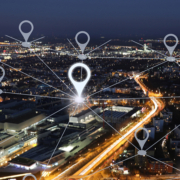 The Netherlands is considered one of the most wired countries in the world and has the fastest connection speeds of Europe. The country directly links continental Europe to North America as most transatlantic sea cables go directly to the Netherlands. The highly competitive Dutch telecommunications network ranks among the world’s best for quality, speed and reliability.
Due to the central position in the European continent, data from the Netherlands can reach 160 million customers within 12ms.

AMS-IX is the leading Internet Exchange in the world. The Amsterdam based independent Internet Exchange, interconnects more than 800 IP networks and delivers peak traffic of over 5.6Tbps. NL-ix interconnects over 115 data centres in 15 countries, by a fully meshed low latency network. Its pan-European Wide Area IX not only reaches the major Internet hubs like Amsterdam, Frankfurt, London and Paris, but is wide spread in Europe covering over 25 metro areas. NL-ix continues rapid expansion to more relevant carrier neutral data centers, bringing the Internet exchange to the doorstep of carriers, ISPs and content networks. With over 675 members already connected and peak traffic at 2.1Tbits/s, NL-ix is considered the fifth largest Internet exchange in the world.

This area is home to Europe’s largest port, the Port of Rotterdam, resulting in an unique delta where internet, infrastructure and logistics meet. It offers the ideal ecosystem for logistics, resilience and redundancy solutions.

The Hague is known as the international city of Peace and Justice. Home to The Hague Security Delta, the largest security cluster in Europe, it offers the ideal ecosystem for hypersecure solutions. As the region is also home to knowledge institutions, such as Delft University of Technology and TNO, research partners and talent are within reach.

Do you want to join the next solution for the ever growing demand of data or do you want to learn more about the possibilities for your company?