The Netherlands in Top 10 in Global Talent Competitiveness Index 2018

The Netherlands ranked 9th internationally in attracting, developing and retaining talent, according to the Global Talent Competitiveness Index 2018. The Dutch cities Amsterdam, The Hague and Rotterdam ranked respectively 11th, 27th and 34th. The index is published by INSEAD, the Business School for the World, in partnership with the Adecco Group and Tata Communications.

The human factor is the most critical resource for national competitiveness. Launched in 2013, the Global Talent Competitiveness Index (GTCI) is a benchmarking tool for governments, cities, businesses and not-for-profit organisations to help design their talent strategies, overcome talent mismatches and be competitive in the global marketplace.

The annual index assesses policies and practices that enable countries and cities to attract, develop and retain both ‘technical/vocational skills’ and the ‘global knowledge skills’ associated with innovation, entrepreneurship and leadership.

The GTCI 2018 edition found that the Top 10 countries have several key characteristics in common and share one major feature: they all have a well-developed educational system providing the social and collaboration skills needed for employability in today’s labor market. Other characteristics in common between the top-ranking countries include a flexible regulatory and business landscape; employment policies which combine flexibility and social protection; and external and internal openness. 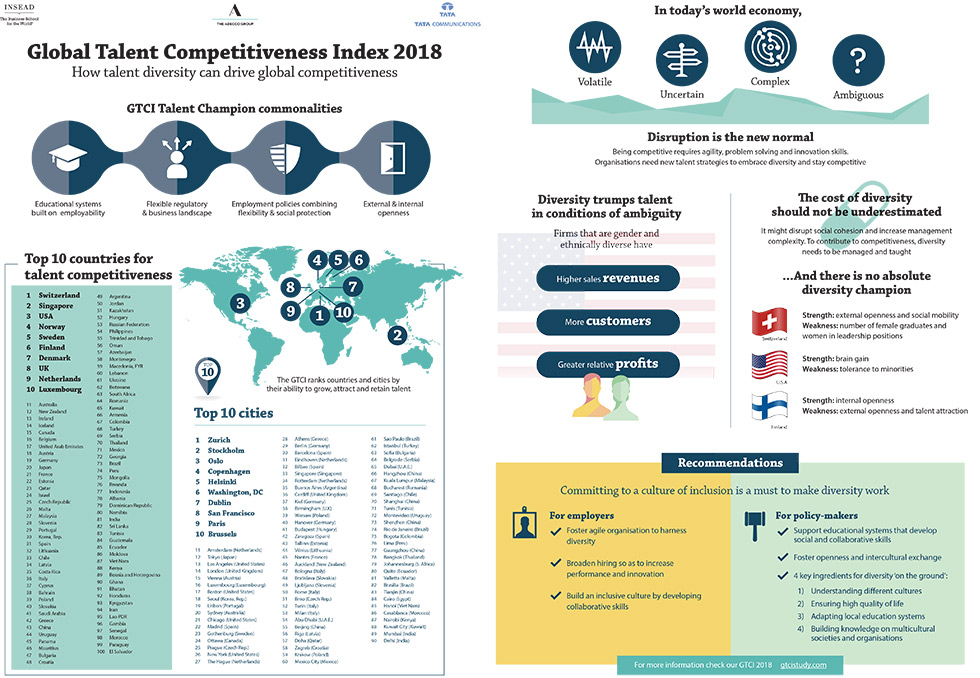 European countries continue to dominate the rankings, taking eight of the Top 10 spots:

In the cities portion of the index, eight out of the Top 10 ranking cities are located in Europe. As in the case of countries, over time, higher GDP levels naturally lead to higher technology penetration, creating ecosystems with better quality education, business, healthcare and infrastructure.

In addition to the talent competitiveness ranking, this year’s report investigated the theme of ‘Diversity for Competitiveness’. The report found that diversity is not an end in itself, but must always be accompanied by a culture of inclusion in order to flourish and have real impact.

“Focusing on diversity and inclusion is crucial to overcome the fractures and inequalities of our age,” said Adecco Group CEO Alain Dehaze. “This means nurturing a culture of inclusion, starting at home and school, fighting bias and developing social and collaborative skills, which are key to unleash the power of work and will make the future work for everyone.”