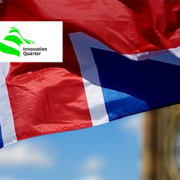 During this seminar, several experts shared their views on important aspects of Brexit. Jeroen Nijland (NFIA) and Jurriaan Kalf (Rabobank) elaborated about its impact on the economy and more specifically foreign direct investment.

Wilco Heiwegen (evofenedex) spoke about the possible impact for importing and exporting companies and how the Brexit will affect international trade and Liam McCloy (FleishmanHillard Fishburn) gave his expert view on the UK politics and the different perspectives on both sides of the pond. Last but not least, Rem Korteweg (Clingendael) gave a remarkable overview of the complexity of the upcoming negotiations and the pitfalls that might be ahead.

We hereby would like to thank all the speakers and attendees for an interesting afternoon, and CIC Rotterdam for the great venue and networking opportuniy at Venture Café Rotterdam. If you missed the event, but would like to learn more, feel free to reach out!

Working together towards a strong region

Together with various companies, knowledge institutions, cluster organisations, incubators, investors and governments, InnovationQuarter works to strengthen West Holland’s position as one of Europe’s top economic regions. The agency focuses on cooperation between innovative enterprises, cross-pollination between the strong regional clusters, the targeted attraction of foreign companies and financing innovative and fast growing entrepreneurs.

InnovationQuarter exceeded its ambitious objectives for 2016 in all these areas.

As well as creating projects, new jobs and investments, InnovationQuarter generates added value by playing a connecting role within the innovative ecosystem and by putting the region on the map as an innovative hotspot. The agency also serves as the link between the ‘top sector policy’ of the national government and the regional business community. “Through the comprehensive execution of our core tasks, which includes drawing on our extensive knowledge and networks, we create added value as a regional development agency,” explains InnovationQuarter Director Rinke Zonneveld. “This means we are more than a connector and a catalyst, more than an acquisition organisation and more than an investor.”

Contributing to the Next Economy

InnovationQuarter’s annual report gives a voice to innovative entrepreneurs who help address challenges in fields such as healthcare, security and energy. Rinke Zonneveld: “In light of our ambition to tackle important social issues, these are the entrepreneurs we like to help.” They offer solutions that are often at the interface of sectors and technologies, which is why InnovationQuarter focuses on cross-sectoral collaboration. “This enables us to bring the ‘next economy’ closer in our region,” explains Zonneveld.

Curious about our results? See the InnovationQuarter Annual Report 2016 online below (in Dutch).