Hydrogen will be essential in achieving a successful energy transition. But, so far, we have not seen many applications of this carbon-neutral fuel in the maritime industry. Hydrogen is much more expensive than, say, diesel because adequate fuelling infrastructure is yet to be built and standards and regulations must be modified to accommodate hydrogen applications. For this to change, more applications will need to be introduced. Enviu, Zepp.solutions and Flying Fish have joined forces to solve this chicken-and-egg problem. By working together, the project consortium aims to create the necessary ecosystem from the bottom up and stimulate supply and demand. The product components have already been delivered and the first test run is scheduled for early next year on the river Meuse.

With their joint Energy & Climate innovation program, the Metropolitan Region Rotterdam The Hague (MRDH), the Netherlands Organisation for Applied Scientific Research (TNO), the province of Zuid-Holland and InnovationQuarter are stimulating sustainable innovation in the region. At the beginning of this year, Enviu (initiator and project manager), Zepp.solutions (hydrogen fuel cell technology) and Flying Fish (rechargeable battery and other electric maritime solutions) received €75,000 from the program to test their innovation in real life.

The International Maritime Organisation (IMO) aims to secure a 40% reduction in CO2 emissions from ships by 2030 and a 70% reduction by 2050 compared to 2008. To achieve this, ships must become more sustainable.

Electric vessels could be a solution but have one major drawback. “Due to the water, a boat experiences much more frictional resistance than a car,” explains Gijsbert van Marrewijk of Flying Fish. “If you want your ship to travel reasonably fast for a large part of the day, a rechargeable battery is too limited in capacity. You will have to recharge it often, which costs time and therefore money.” Hydrogen can be used in a fuel cell, generating electricity to power a vessel and increase its range.

When hydrogen reacts with oxygen in a fuel cell, it emits only water. In other words, it is a carbon-neutral fuel. If also produced by means of electrolysis and renewable electricity, it is a zero-emission fuel. But unlike in the automotive sector, hydrogen applications are not yet widespread in the maritime industry.

Maarten Fonteijn of Enviu explains, “The main challenge is not the technology itself but scaling up. We need more applications to make new technologies competitive. Diesel is extremely cheap and compact, a tough competitor if the new technology does not have the right scalability and/or rewards. Also, both regulators and passengers are quite unfamiliar with hydrogen as a fuel, leading to questions about safety and uncertainty regarding regulatory requirements. We need pioneers to show them how it can work.”

According to Gijsbert, “Many companies are held back by these obstacles. Conducting research and trying to effect change are time-consuming. But as a small company, we are more flexible in this respect.”

“The main challenge is not the technology itself but scaling up.

Electric drive trains have been available for recreational watercraft for some time. But for other applications, such as passenger water transport, the system must be efficient, cost-effective and sustainable over a number of years. “We are looking for energy that is both sustainable and economically feasible. It has to be affordable,” says Gijsbert.

Jonas Brendelberger of Zepp.solutions adds, “That is exactly what this project is about. It’s not about finding out whether it is technically possible but about showing that we can achieve the same results with clean fuel. Ideally, the only thing we want passengers to notice is that the noise from the diesel engine has disappeared.” 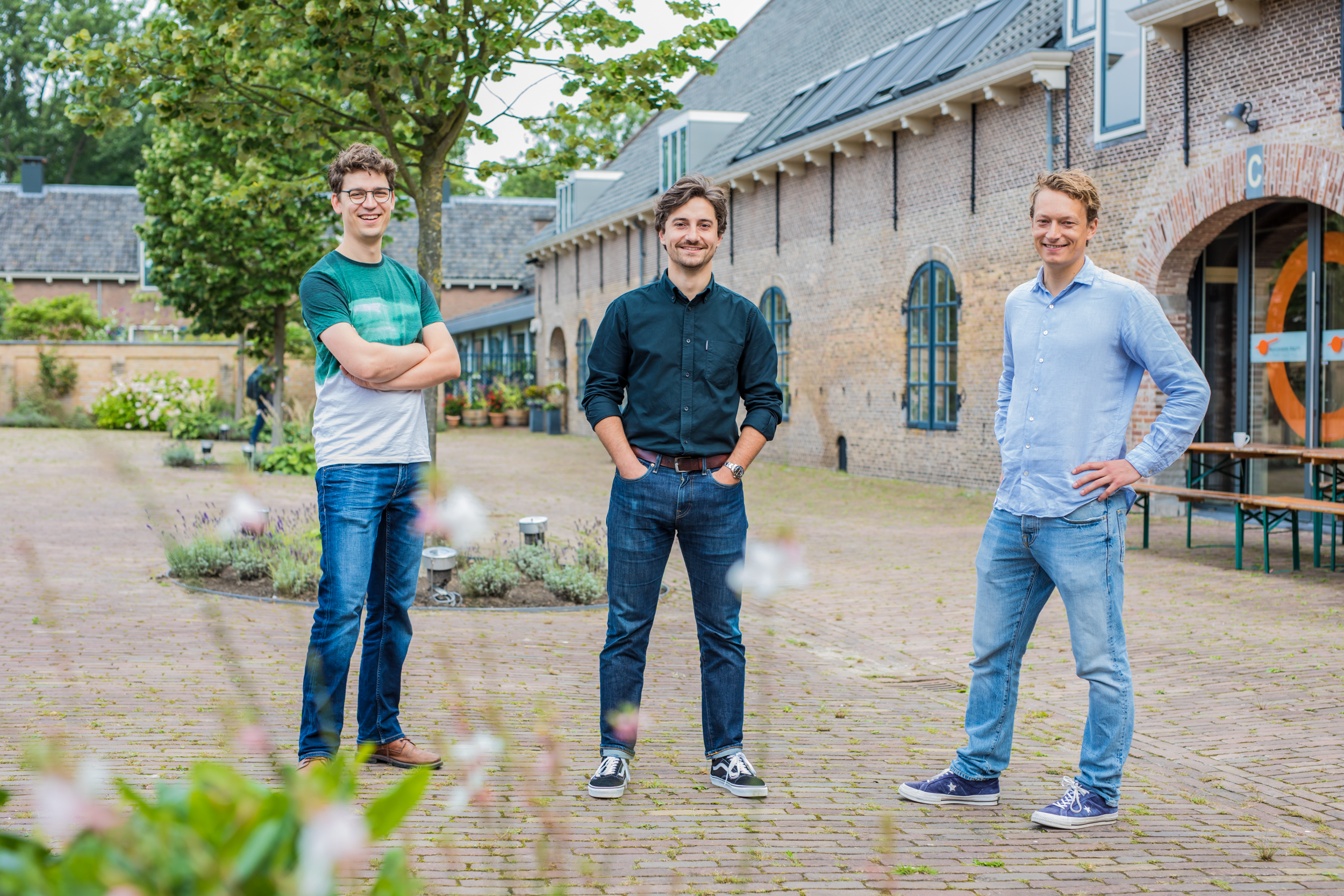 “We are looking for energy that is both sustainable and economically feasible. It has to be affordable,”

It is a concrete project. The water taxi is a small boat that carries a maximum of 12 passengers. The client’s requirements are very clear. Watertaxi Rotterdam also has the ambitious goal of operating a zero-emission fleet by 2030. “The water taxi is therefore a very well-defined project,” says Maarten. “Together with the Port of Rotterdam, we are investigating how the safety requirements will have to be adapted. Once we know that, we can look into regulations for other ships.”

“When it comes to existing regulations, you must have the guts to ask critical questions. It is easy to say that something cannot be done because it does not meet the current regulations.”

“Those are precisely the sorts of things this project allows us to investigate,” adds Gijsbert. “For example, the safety requirements include details about fire extinguishers for flammable liquid fires, which do not apply to hydrogen. The regulations also state that a greater distance is required between a hydrogen tank and a ship’s exterior than is possible in a water taxi. We are looking into how the regulations can be modified, while guaranteeing at least the same level of safety and performance.” 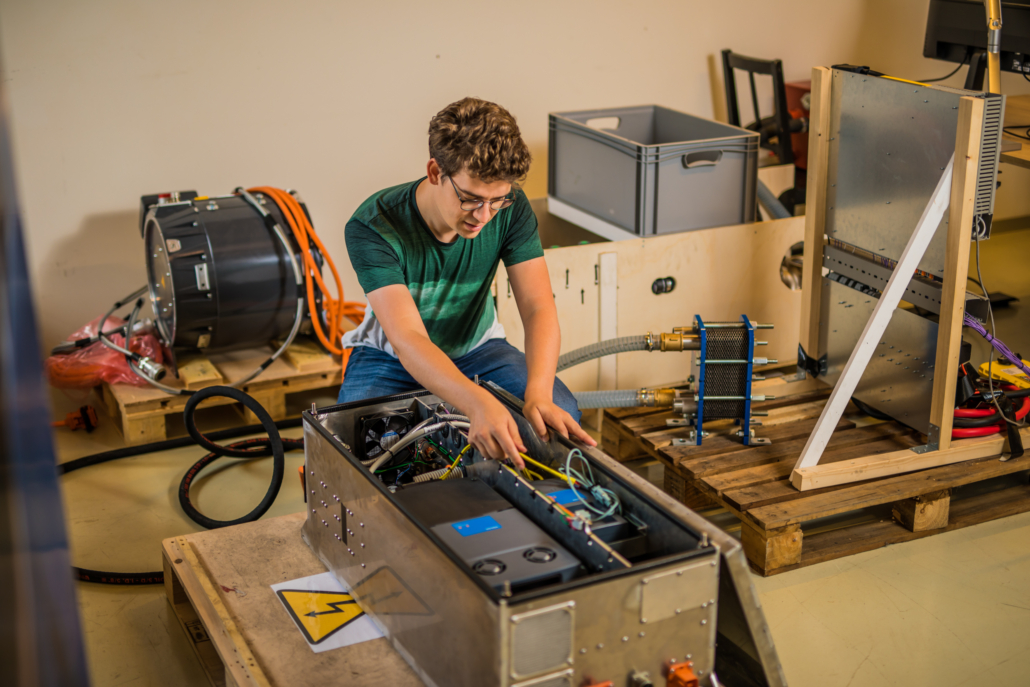 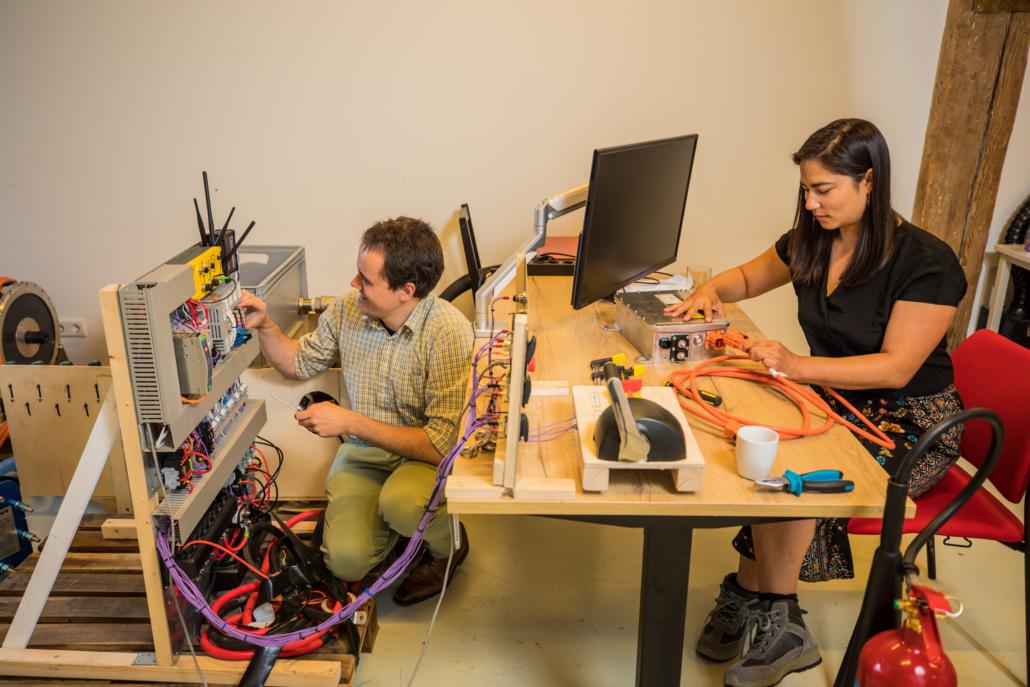 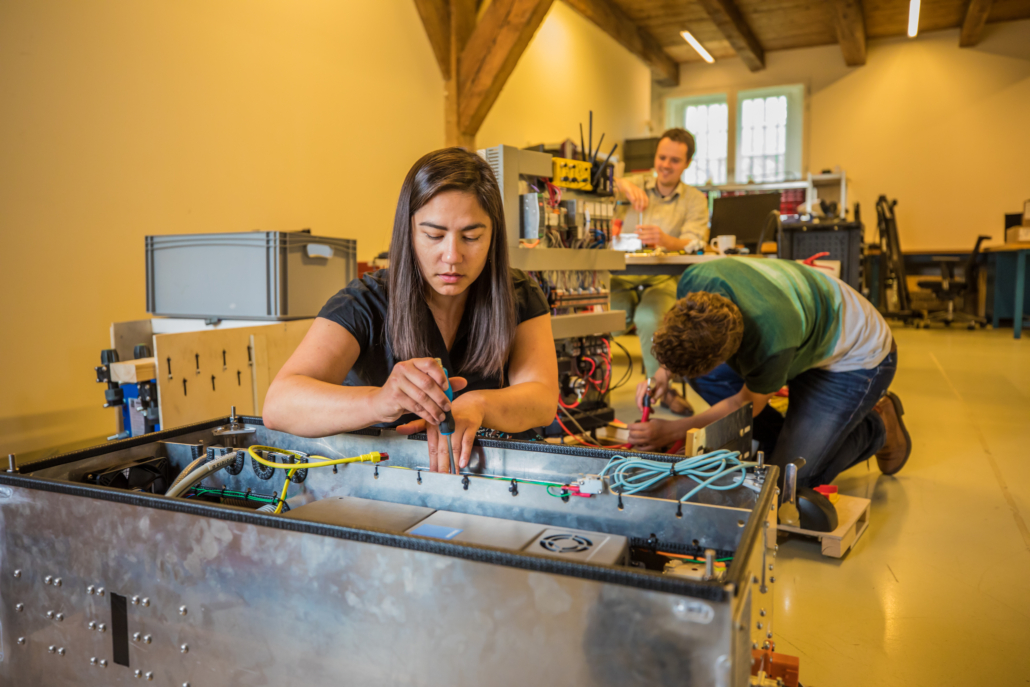 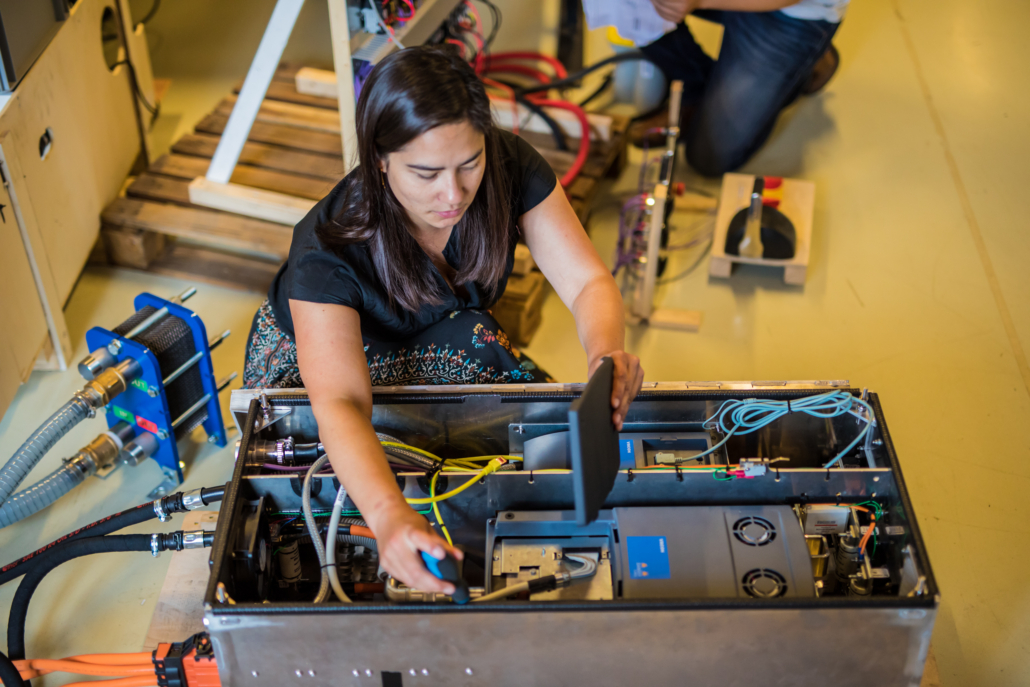 The consortium hopes that the results of the project will lead to the development of more hydrogen-powered water taxis and boats. New applications will be able to build on the lessons learnt about regulations and safety in this project.

The designs are now ready and most of the boat’s parts have been delivered. A battery-powered prototype will be tested this autumn; the first hydrogen-powered test run will follow in early 2022. Scaling up after that will require a fuelling station.

Maarten says, “Together with the Port of Rotterdam, we are exploring the possibility of building a fuelling station on the RDM campus. We are also looking for other parties that would want to use it in order to make it profitable.”

This is a small and well-defined project, but its impact extends far beyond passenger water transport. It could have a major cross-sectoral effect that reaches beyond the maritime industry.” 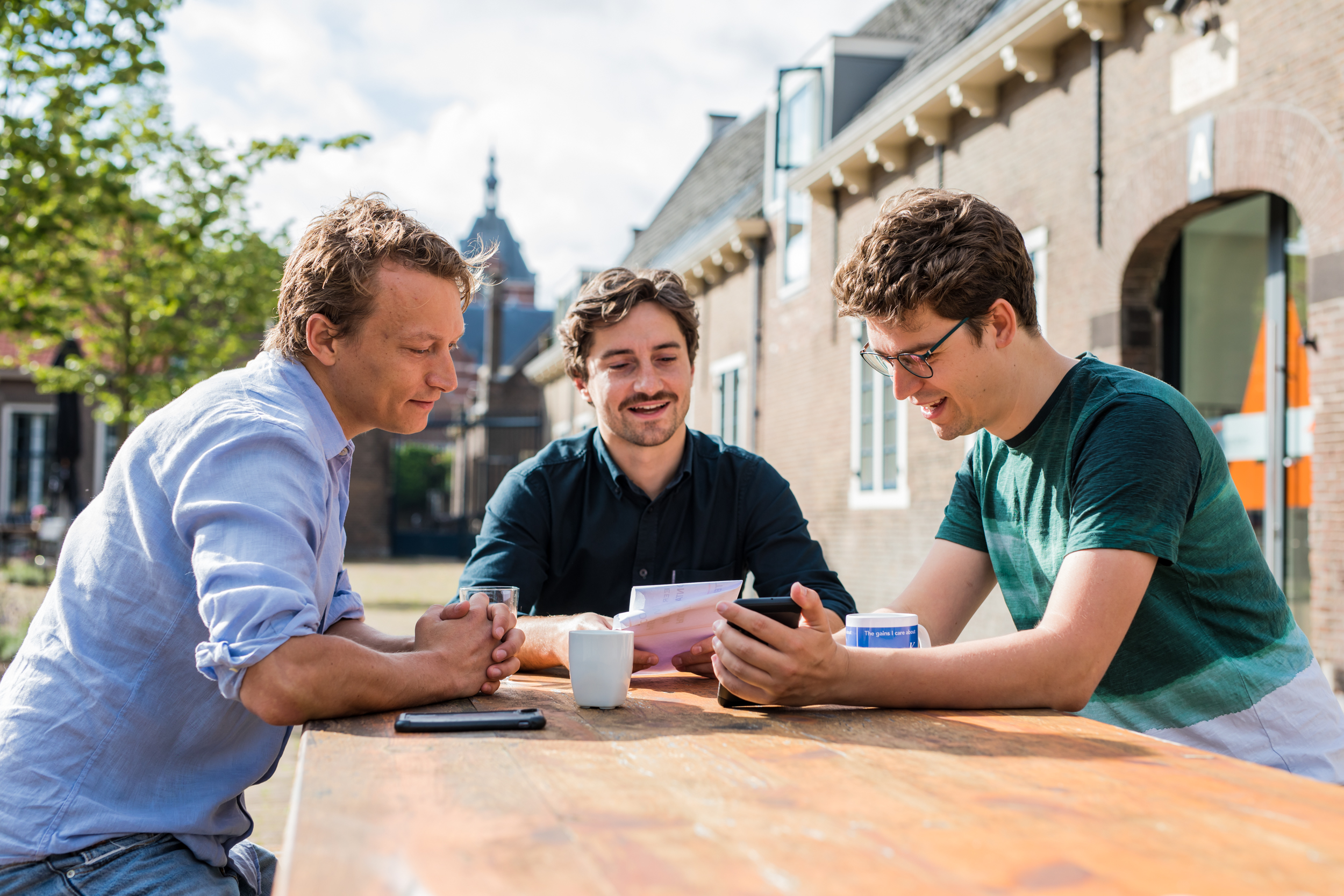 Jonas remarks, “The more accepted the technology becomes, the more attractive scaling up becomes. Hydrogen offers an enormous range of applications. If the fuelling station is located on the quay, hydrogen buses and trucks may also be able to use it. This is a small and well-defined project, but its impact extends far beyond passenger water transport. It could have a major cross-sectoral effect that reaches beyond the maritime industry.” As more hydrogen applications emerge, there will be greater demand for the fuel, making it more cost-effective.

“With Enviu, we have seen in other sectors that we can bring about this kind of large-scale transition by starting with something small and concrete,” says Maarten. “What can we do today? What can we learn from that? What business case can we create based on that? Bringing innovations to the market requires action. An icon such as the water taxi being at the forefront of the necessary transition on the water makes it super tangible.”

Jonas adds, “We are all looking forward to the end result: the taxi actually transporting passengers. If we can pull that off, it will be a world first. No one else has done it so far.”

“We are all looking forward to the end result: the taxi actually transporting passengers. If we can pull that off, it will be a world first. No one else has done it so far.”

Interested in joining the hydrogen community in our region? 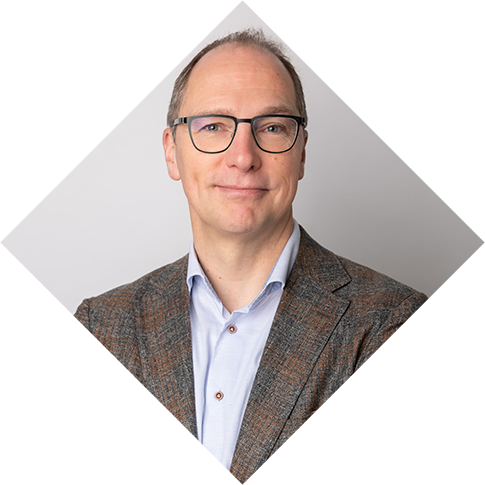 How PrivacySolved is leveraging the Soft Landing Program to build opportunities...
Scroll to top NIEUWSBRIEF