Today the Hyderabad-based IT security provider E2Labs opened its first European subsidiary in The Hague, the international City of Peace, Justice & Security. E2 Labs new European office will act as its global headquarter and is positioned to leverage the powerful strategic advantages of being present in The Hague Security Delta, world’s leading security cluster. At the welcoming ceremony the Ambassador of India, The Honorable Mr. Venu Rajamony, emphasized the strong ties between India and the Netherlands. Mr. Karsten Klein, Deputy Major of The Hague, presented E2Labs’ CEO Dr. Zaki a special welcoming plaque to mark the festive occasion.

As an information security training specialist with the distinction of establishing Asia’s 1st Anti Hacking Lab+Academy at Hyderabad, E2Labs is helping bridge the talent gap as it trains scores of candidates to deliver a perennial pipeline of qualified talent for the global information security industry.

E2Labs received distinctive awards for its services. They’re one of the Top 20 Most Promising Cyber Security Companies of India, are positioned in the Top 100 Companies of Asia (Red Herring, US) and are Highly Appreciated by W.I.P.O (United Nations). Recently, E2 Labs was handpicked to be the exclusive training partner in India for Mile2, world’s largest certification body for information security.

Bridging the IT talent gap

E2Labs aims to leverage The Hague’s knowledge and expertise in cyber security, forensics, national security, and critical infrastructure to drive capacity building through a range of skill development programs to be imparted across the country. E2Labs seeks to utilize The Hague Security Delta’s (HSD) profound insights and the access to latest innovation to create globally-relevant, outcome-driven training programs in the security domain that lead to the creation of highly skilled IT professionals for the global cyber security industry. 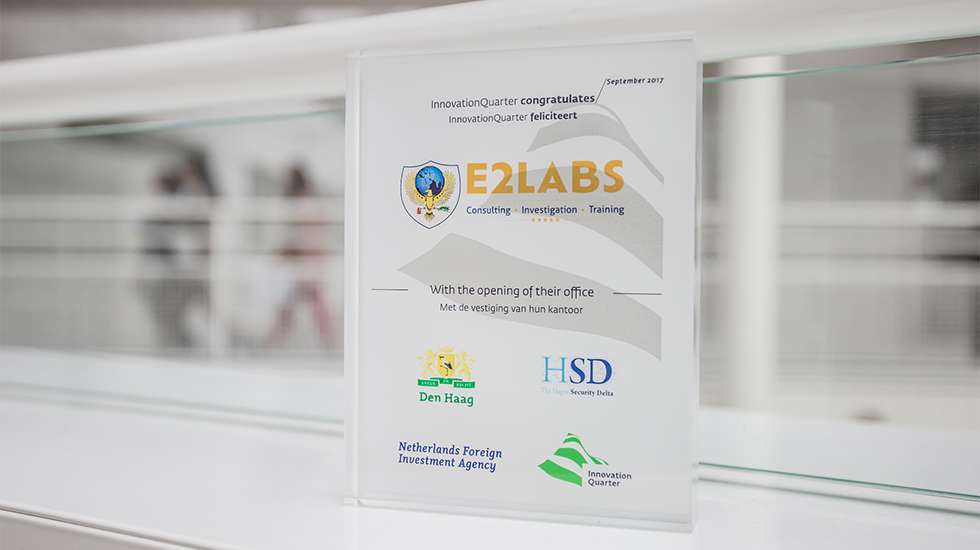 European Headquarters based in The Hague

Deputy Mayor Karsten Klein is The Hague’s alderman for Economic Affairs, Harbours, Welfare and Health and met E2Labs’ Dr. Zaki for the first time in October 2015 during an economic mission to India. A delegation consisting of Dutch companies, HSD partners and government visited the Hyderabad region to learn about the developments in India and the economic development that the 1.3 billion people nation is undergoing. Rinke Zonneveld, InnovationQuarter’s director, joined this mission where the European expansion plans for E2Labs were discussed.

Succeeding the mission, and with the Data Security Council of India (DSCI) and the National Association of Software and Services Companies (NASSCOM), Dr. Zaki visited the City of The Hague and The Hague Security Delta several times over the past two years. In 2016 preparations were made to establish the company in the Netherlands and now, during the Cyber Security Week 2017 in The Hague, the opening of E2Labs European headquarters is officially celebrated.

We at E2Labs consider it a privilege to be associated with the world’s largest cyber security community, The Hague. This is a major boost to our company and will help advance our capabilities in IT security to impart improved training programs, enable us provide enhanced security assistance to governments and aid in delivering high performance consultancy services to our roster of 400 clients spread across the globe.
~Dr. Zaki, Chairman & CEO of E2Labs

“In its search for a suitable location for their European Headquarters, E2Labs was well supported by InnovationQuarter in co-operation with The Netherlands Foreign Investment Agency (NFIA), HSD and the City of The Hague,” says Chris van Voorden, Director Foreign Investments at InnovationQuarter. “We are pleased with the choice of E2Labs for The Hague, and are proud to see that they recognize The Hague’s rich cyber security community and the strong innovation culture in The Netherlands.”

Indian delegation with o.a. E2Labs visit the Municipality of The Hague, The Hague Security Delta and the Cyber Security Week © Daniel Verkijk

Netherlands and India share strong bilateral ties. Netherlands is India’s 5th largest investment partner and 3rd largest source of foreign direct investments (FDI) globally. Importantly, both countries espouse the same values with respect to laws and security. E2Labs’ presence at The Hague will help strengthen the ties further through co-operation on cyber security, a critical area which has emerged as one of the biggest challenges of today’s society.

To strengthen the bilateral relationship, The Hague and the state of Karnataka have signed a MoU, which actively focusses on startups, cyber security and elderly care technology. The Municipality of The Hague regularly visits Bangalore (the state of Karnataka) to implement the MoU and creates awareness for The Hague as an international city that welcomes Indian entrepreneurs and businesses. Due to the intense focus of the Municipality of The Hague and its acquisition partners such as InnovationQuarter, the establishment of E2Labs in The Hague can be considered a result of this co-operation.